The Edinburgh Indoor Market only started in December 2016, but it feels like it’s been around for a lot longer. There’s been little to have to build, awareness of the event was there from the off, it felt like it established itself straight away.
That said, people are still discovering it for the first time. Alma, Stacey, Steph and Nicola – A mum, daughters and niece aged from 26 to 52 – heard about the April market via Facebook and thought they’d travel from Dunfermline to make a day of it. 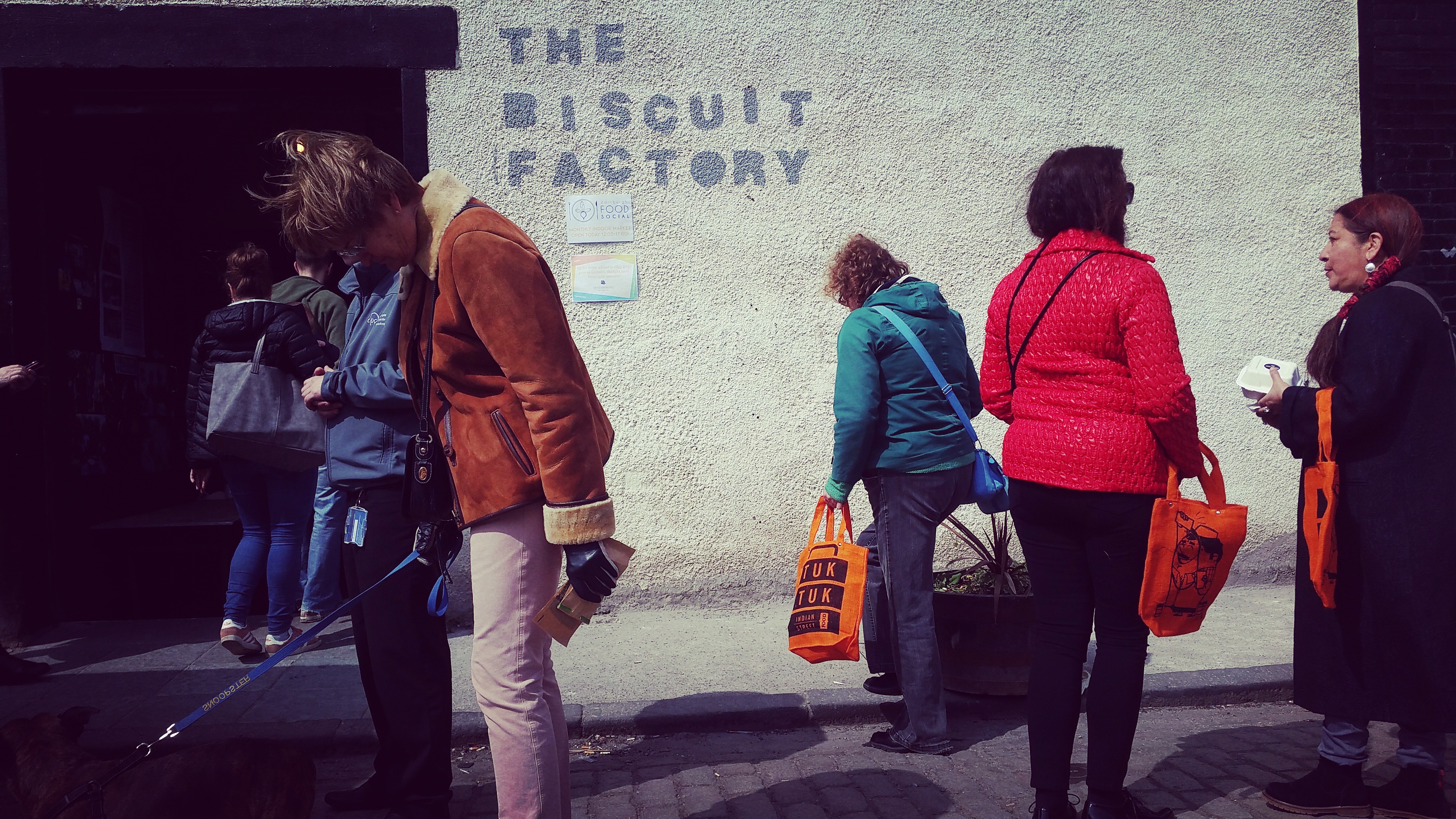 “We came for a look to see what it’s all about,” said Steph in between bites of her beef bolognaise nachos. “I don’t routinely go to delis, there’s not really anything like that in Dunfermline or Kirkcaldy. We go to the butcher, but for artisan things like these then you’ve got to go a bit further afield,” she said showing a carrier bag of bread, cakes, steak pies and chicken kebabs.

Her sister munched on a pulled pork wrap whilst her cousin enjoyed chicken fajita nachos. “We really like the market, I’d perhaps liked to have seen more crafts but I’m glad we visited. We’re going to have a wander around The Shore now, but we’ll be back next time.”

As you’d expect, there are always Edinburgh locals making up the vast majority of attendees at the market, but it’s notable how many international visitors there are. It was the third Edinburgh Indoor Market for vendor Rona Innes of Rona Innes Art. “Lots of people who buy my products are American, Canadian, French, German, it’s a real mix here.” 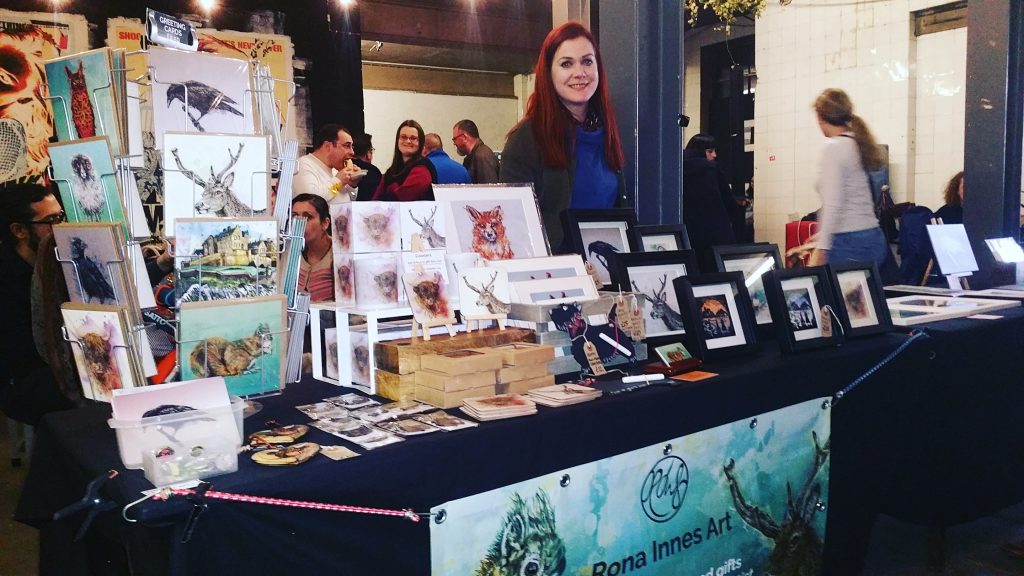 As if on cue, Gabriella bought some wooden ‘coo’ decorations from Rona. “I’m visiting Edinburgh from Washington DC, I heard about the market on Facebook. I love the combination of food and crafts. I love the Scottish themed stalls, but there’s so much from around the world here. I just got my lunch from the Syrian Kitchen stall.”
Rona has got her stall booked in for all of 2017. “It’s a really good flow of people here, it’s a destination market and the products are really well received. The atmosphere is fantastic, the live music, the people from all over the world and other traders make the whole thing really enjoyable.” 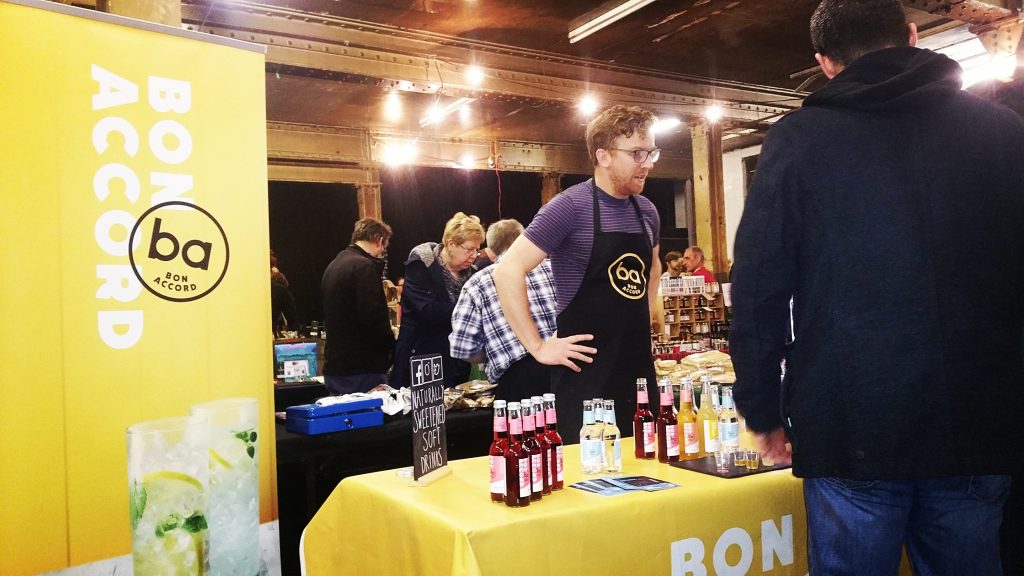 Bon Accord at the Edinburgh Indoor Market

Leith’s Biscuit Factory has been home to the Edinburgh Indoor Market since it started 6 months ago. The arts and fashion hub just off Bonnington Road hosts the event for free as their way of supporting Edinburgh Food social – a social enterprise project founded by The Edinburgh Larder to bring the benefits of using local, organic food into schools and communities across Edinburgh and Fife.
“I saw the space they had and knew the Biscuit Factory would be perfect for it,” said Eleanor Cunningham, owner of Edinburgh Larder and the founder of Edinburgh Food Social. “I’m a big fan of the indoor market in Belfast and saw how well it worked there. I saw no reason why their success couldn’t be replicated elsewhere. Edinburgh, of course, has often horrific weather so for me it was an obvious thing to do.
“The whole project has real traction at the moment. Last year we raised funds via Kickstarter for a food truck that visits schools and communities. We’re about to open a teaching kitchen in Leith as a direct result of funds raised from the indoor market.”
The tangible benefit of the market has actually been 18 months in the making. Cooking classes for school children by Edinburgh Larder are nothing new.
“Showing school children how to prepare and budget for local, organic, healthy produce is something we’ve a long history of. When we first started, it was really rewarding to see just how engaged the kids were with what they were being shown. I think one or two even decided that it could be a career choice. They were getting proper catering industry insight.
“The informal teaching atmosphere was something they really responded to, so much so that the practical knowledge they picked up was of great value to them, especially since there might not have been any interest in cooking before then.” 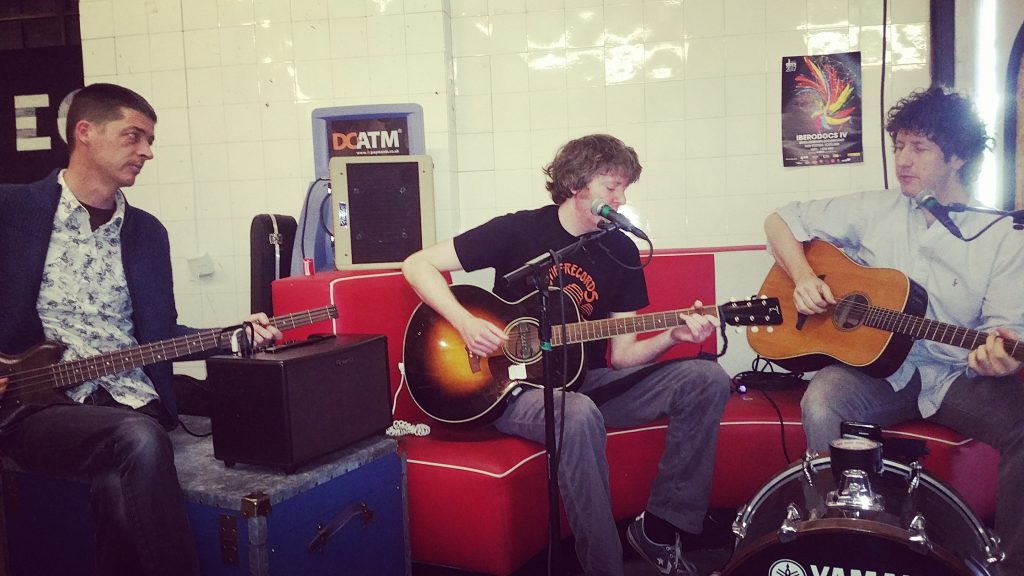 There are now plans to help school leavers with their culinary skills before heading off to university and teaching for parents too.
“The market is enabling us to pass on valuable knowledge to people of all ages and backgrounds. The whole point of the Edinburgh Larder was to make local, seasonal, ethical and organic food accessible and affordable, but knowing how to source and then use that produce is a different matter. So we like to think we offer a holistic approach.”
Marc and his girlfriend Lisa journeyed from Glasgow to attend their fourth Edinburgh Indoor Market. “I think we’ve been to every one of them, we love it. Marc likes the crafts, I like the food and we both really enjoy the live music.
“I think it might’ve been Twitter where Marc first heard about it. We wanted to do some shopping in Edinburgh and thought we’d check out the market seeing as we were through this way anyhow. We’ve turned it into a regular wee thing, so once a month this gives us a change from Glasgow.
“Marc likes to think he’s a bit of a genius in the kitchen so although he likes the crafts, he’s always trying the food and trying to work out the recipe. One of the vendors actually wrote down a recipe for him which was brilliant.”
“We’ve been telling our friends and family to check this place out. We really enjoy it.”
The May Edinburgh Indoor Market takes place this coming weekend at Leith’s Biscuit Factory on Anderson Place, just of the Bonnington Road. Your support will ensure the continuation of Edinburgh Food Social’s work – putting an end to ready meals loaded with fat, salt and sugar and teaching the essential knowledge needed to enable those who need it most to source, budget for and prepare local, ethical, seasonal, organic food. 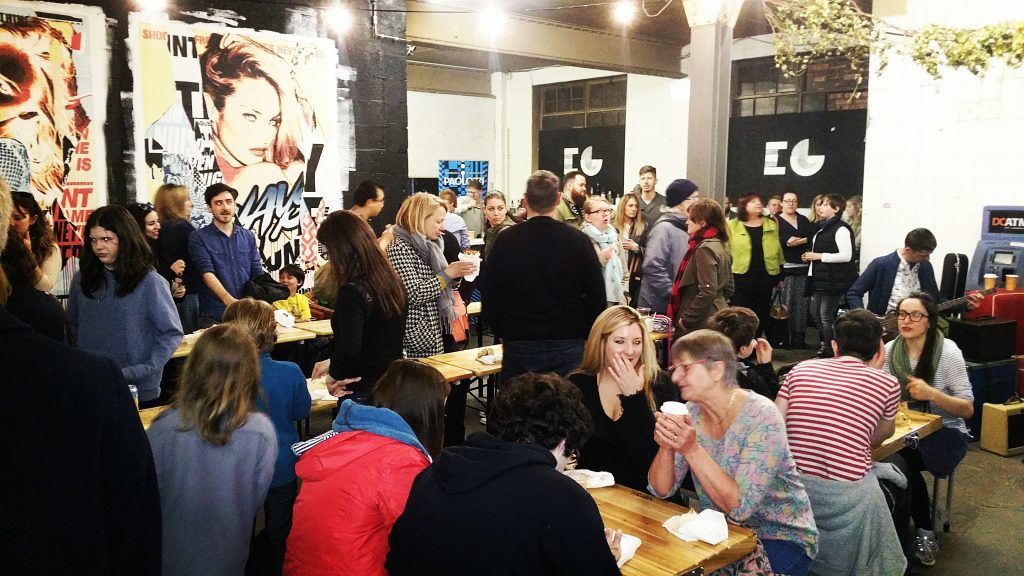 People tucking into their food at the Edinburgh Indoor Market 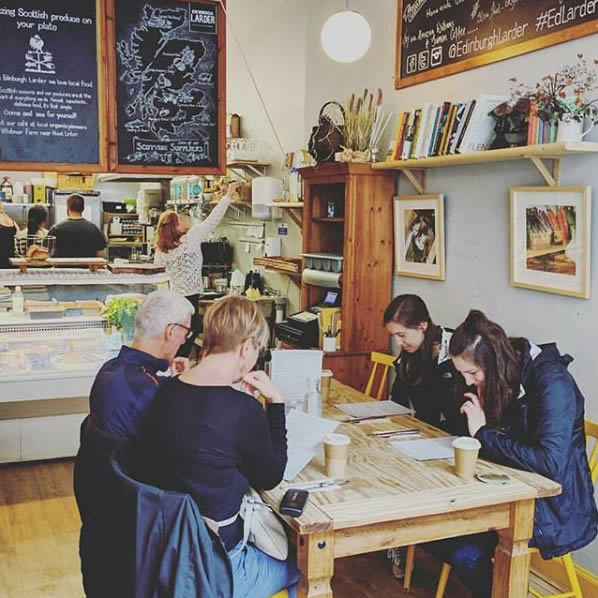